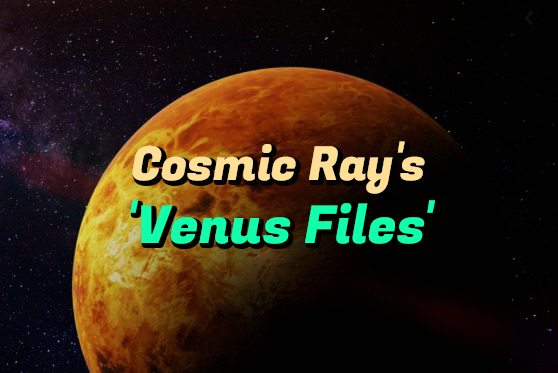 By Dr. Raymond A. Keller, author of the international awards-winning ‘Venus Rising’ book series, available on Amazon.com while supplies lastIn these coronavirus-plagued times, with even small gatherings being limited to no more than ten persons or completely curtailed, the usual forums available for me to answer pertinent questions that readers of my books have about the planet Venus and its inhabitants specifically, or the UFO phenomenon in general, have been closed off. Many thanks are extended to Lon Strickler of phantomsandmonsters.com for the opportunity of tackling some of these issues in this new column, which I will try and continue on at least a monthly basis. Should you wish to contact me for the purpose of sharing information about Venus, Venusians, flying saucers or other outer space phenomena, or asking questions about these same topics, please do not hesitate to send me an e-mail to rkeller1@mix.wvu.edu, and I will try my best to find some answers for you and publish them here. Kecksburg “Meteor” and Project WHITE STORK 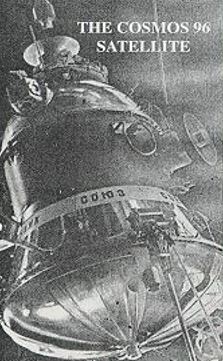 Kosmos 96 Soviet Venus probeWhen it comes down to what crashed in Kecksburg, as far as the former Soviet authorities, and now Russian Space Agency spokespersons are concerned, they would only speculate that anything that crash-landed in American turf was probably American spy technology that the United States was too embarrassed to acknowledge.In May 1998, Stan Gordon interviewed Russian Cosmonaut Viktor P. Savinykh, who then served as rector of Moscow State University of Geodesy and Cartography. Gordon said, “I took the opportunity through an interpreter to ask him whether he could help solve the Kecksburg mystery. He, too, suggested rather emphatically, and with some laughter, that whatever plunged into Kecksburg surely was some faulty American technology.”But none of this takes into account one of the United States Air Force’s most top secret programs during the 1960s, Project WHITE STORK (United States Air Force Foreign Technology Division, Soviet Effort to Contact Extraterrestrial Life, Maxwell Air Force Base, Alabama, USAF Historical Archives, 1967) whose very purpose was to monitor and report on the Soviet Union’s progress in searching for and establishing communications with extraterrestrial life. The majority of the space probes dispatched to other bodies in space by the former Soviet Union were targeted for Venus. In my second book in the ‘Venus Rising’ series, ‘Final Countdown: Rockets to Venus,’ a fuller extent of the WHITE STORK Venus revelations is presented.The Kosmos 96, officially designated 3MV-4 No. 6, was a space probe launched as part of the Soviet Venera program, supposedly intended to make a flyby of Venus. Allegedly, however, there was a launch failure that forced the spacecraft into a low Earth orbit. TASS, the Soviet News Agency, reported that the Kosmos 96 was launched on 22 November 1965 on a Molniya 8K78 rocket. In light of the WHITE STORK revelations, however, I wonder if the Kosmos 96 may have actually been sent up during a much earlier launch window, as part of the Soviet Union’s clandestine space program, whence it skimmed samples from the Venusian atmosphere pushed off as a long tail from the planet’s North Pole by the strong solar wind, to be followed by a return voyage to Earth. The actual samples could then be analyzed by experts from the Soviet Academy of Sciences to prove the existence of a suitable atmosphere for the later human exploration of Venus, and possibly the presence of primitive life forms, like microorganisms, on our sister planet.We must always keep in mind that as far as space exploration and the search for extraterrestrial life, primitive or advanced, the official policy of the Communist Party of the Soviet Union has always reflected the Marxist-Leninist materialist philosophy that, “Life is a normal and inevitable consequence of the development of matter, and intelligence is a normal consequence of the existence of life.”Until next time, keep in mind the words of the Venusian Commander Aura Rhanes of the Moon Base Clarion, “Work, study, meditate.”(Note: Dr. Raymond A. Keller, a.k.a. “Cosmic Ray,” will be appearing with Omnec Onec, the Ambassador from Venus, ufologist Laura Eisenhower, and other Venusian contactees, at the Meet the Venusians Mt. Shasta, California, Summer Conference, Wednesday, 26 August – Sunday, 30 August 2020. For additional information or tickets please call Rob Potter in Mt. Shasta at (530) 925-3502, or visit his website at thepromiserevealed.com.) 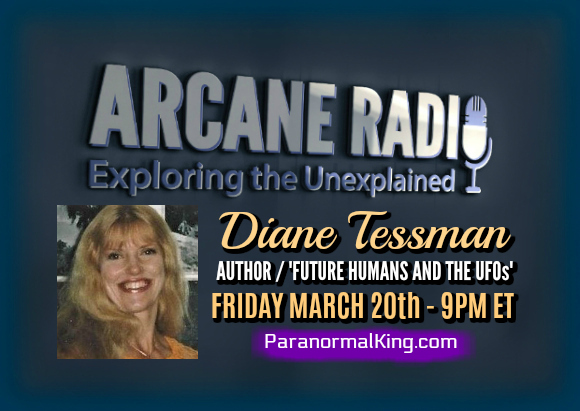 Arcane Radio is LIVE on the Paranormal King Radio Network or the direct link at Mixlr – Paranormal KingFacebook event announcement: Diane Tessman – Experiencer, Ufologist and Author – Arcane RadioJoin me as I welcome experiencer, ufologist & author Diane Tessman to Arcane Radio. Diane’s work on the UFO puzzle began at the age of 4, when she was abducted twice by UFO beings in 1952 & 1953. She had a few conscious memories from those experiences; the most vivid was that her “guide” (head of abduction crew), said to her, “We are from your future.” After many decades, she now has reached a point of certain knowledge, that at least some UFO occupants are ‘Future Humans.’ In 1981, Diane underwent hypnotic regression with Dr. R. Leo Sprinkle, at the University of Wyoming, and remembered many details of her childhood encounter. Her recent book is titled ‘Future Humans and the UFOs: Time for New Thinking.’ Diane is also the founder and director of the Star Network Cat Sanctuary and Wildlife Refuge in her native Iowa. Her websites can be found at earthchangepredictions.com and teamtimetravel.com – This should be an interesting & informative show! Join us this Friday, March 20th at 9PM ET / 6PM PT on ParanormalKing.com or the direct link at mixlr.com/paranormal-king – Meet us in the chat room…just click the banner or go to www.paranormal.olicentral.comListen to our podcast at Arcane Radio on Podbean or on my YouTube channel. You can also listen to the podcast at Arcane Radio on Stitcher – iOS, Android and the Webplayer. Please consider becoming an Arcane Radio patron. Thanks…Lon

Hey folks. I ask you to consider a donation to Phantoms & Monsters. Yes, I do receive some funds through books and advertising, but it is not always enough to cover expenses – which include my Google advertising costs (soliciting reports), Arcane Radio fees, research access costs, etc. If you are interested in helping out, you can use the PayPal donation buttons on the blog and newsletter or go directly to PayPal.com and use my email lonstrickler@phantomsandmonsters.com as the recipient. You can also make a donation through Facebook Messenger. Thanks for your continued support. Lon